Bombay Cats are tolerant and easygoing felines. They like greeting your visitors and gets along well with the dogs, children and other pets. Having reputation as a lap cat, they can also play active games such as fetching. If you don’t have the desire to interact with him frequently or enough time, don’t own these cats because they love owner’s attention and want to be involved themselves in everything they do. Some interesting facts about Bombay:

Is Bombay Cat breed suitable for you?

Bombay cats look like a miniature version of the wild cats. To achieve these cats, breeders took two different paths. In Britain, breeders crossed black domestic cats with Burmese. In the United States, the breed was created by crossing black American Shorthairs with sable Burmese. In 1950s, Bombay’s development is generally credited to Nikki Horner of Louisville, Kentucky of USA. These cats are recognized by The International Cat Association, the Cat Fanciers Association, and other cat registries.

Bombays give an appearance of being lithe, sleek, and light. Most people who pick up these cats find them to be much heavier than expected. With up to 12 pounds of mostly muscle on their medium frame, these cats certainly resemble a panther in its musculature.

For all its muscles, Bombays are still medium-sized felines, although some male cats may fall into larger sizes. These cats are even sleeker than their ancestor, the Burmese. Bombays have large and prominent eyes and rounded heads that give them panther-like appearance. Their eyes and ears should be set far apart on their heads.

The ears of these cats always remain alert, with rounded tips and a forward tilt. It has a rounded, short muzzle, but is never snub-faced. Their profile features a marked but moderate stop. Their black coat imitates the big cat in both their satin-like texture and color. As Bombays move through the light, its fine, short coat shimmers like dark patent leather.

Bombay’s eyes are ideally bright copper color, often bringing new pennies to the mind. However, they can range from orange to gold. The most marked difference between the British Bombay cats and their American counterpart is the eye color; while an American Bombays would be disqualified for their green eyes, they are acceptable in British version of this breed.

The behavior of Bombay cat is more similar to a dog’s than any jungle cat. These cats are quite gentle and loving, preferring to curl up in their owner’s lap than to roam about on the hunt. They can become overly attached to their human companions and start following them around the house and curling up with them under the blankets at night. With their curiosity and intelligence, these cats usually find themselves in the middle of the action. These cats can get along well with other dogs and cats but often insist on being the dominant animal. They are good companions for anyone old enough to treat them respectfully and gently. Overall, this breed of cats is extremely loving and lively.

Bombays are usually healthy cats, but they may have some occasion health problems. They can also inherit a number of different illnesses and diseases, for example Bombays have inherited a tendency to craniofacial abnormalities from their Burmese heritage. These cats may also suffer from excessive production of tears and breathing problems.

Further, they have tendency to develop hypertrophic cardiomyopathy (a heart disease in which the heart muscle thickens gradually, leading to troubles). Also, obesity can be a serious problem in Bombays due to their tendency to overeat. The obesity can lead to arthritis, diabetes, and a liver disease called hepatic lipidosis.

Owing to fine coat, Bombays need little grooming. Every one or two week, owners should brush through their fur with a curry brush. 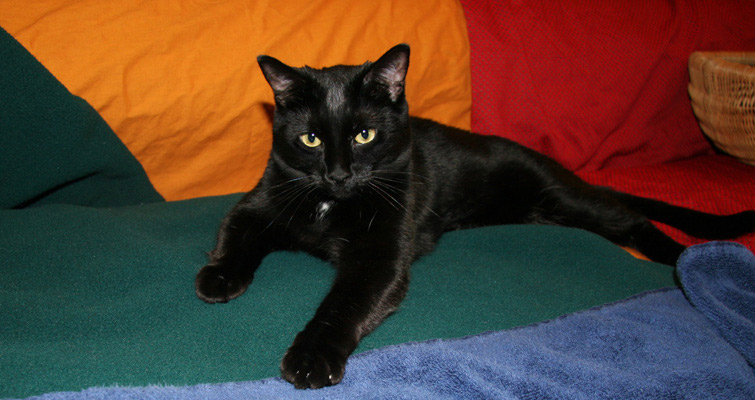 It is also important to keep Bombay’s teeth and ears cleaned, and to maintain its claws at an appropriate length. It is best to start out with the brushing, trimming, and cleaning when your cat is still a kitten.