On August 21 the Montgomery Police Department in Wheaton, Maryland responded to a call about a dog that had been shot. When they arrived the found Ruby, a 9 month old Boxer mix who had gunshot wounds to her face and shoulder. She had been shot by her owner inside their home.

Officer Michelle Ballor transported Ruby to the Kindness Animal Center in Wheaton where they began life saving measures. Doctor Jeff Zolkiewicz informed the officers that Ruby was going to need extensive medical care to save her life. The police called Ruby’s owners and suggested they surrender her to the hospital rather than euthanizing her.

After she was surrenderd to the hospital Doctor Jeff Zolkiewicz performed several saving surgeries on Ruby at no cost. She’s still going to need extensive medical care and further procedures. A Saving Ruby fundraiser has been set up by the Kindness Animal Center and Montgomery Police Department to cover her extended care.

Finding a new home for her was going to be hard so Dcotor Zolkiewicz saved her once again by adopting her.

Ruby is the first animal that he’s ever adopted after treating them in his 20 years of practice. “I’ve been able to resist bringing them home. Something about Ruby just caught me. She just seemed like she didn’t deserve what happened to her,” he told the Washington Post.

Ruby is the first dog he’s treated for gunshot wounds. He says she was shot at close range, probably less than a foot away. A bullet entered the left side of her muzzle and came out at the base of her ear. It shattered her jawbone and nearly tore her tongue in half. She was also left with a big open wound on her neck which is still being treated.

“She’s been through an incredible amount,” Zolkiewicz said. “She is such a trouper. She never complains. She is such a good patient.”

Despite the horrible attack Ruby shows no fear of humans. She loves playing and the only time she whines is when she’s being placed back inside her kennel.

Zolkiewicz plans on taking her home once she’s recovered.

As for the shooter the case remains under investigation. 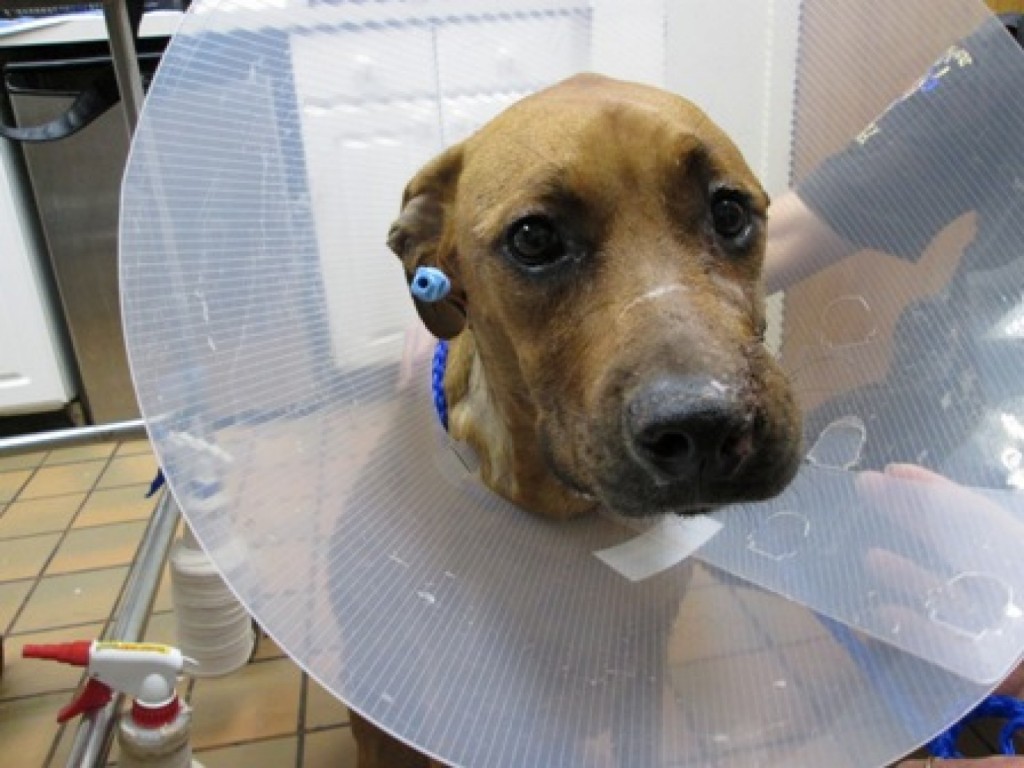