Dog Thrown From Moving Car Struck By Another Vehicle

Authorities in New Jersey are seeking any information following an incident that occurred on Saturday afternoon on New Jersey’s Garden State Parkway. A dog was thrown from a moving car and then struck by another vehicle. She miraculously survived and is now in stable condition, being treated at the Red Bank Veterinary Hospital.

Officials say the accident took place between noon and 1 p.m. Saturday in the southbound express lane of the highway near Exit 116 in Holmdel Township, New Jersey. After the dog was thrown from the window of a car she was struck by another vehicle. The dog then ended up crossing the local lanes of the highway and went into the express lanes where a Good Samaritan stopped traffic to help the dog cross and then called the state police.

The first officer to arrive was Trooper Tara Karagias, she immediately rushed the dog to the Red Bank Veterinary Hospital where they were able to able to control her internal bleeding. “By her racing it over to the Red Bank animal hospital, they were able to control the internal bleeding,” SPCA Chief Law Enforcement Officer Victor “Buddy” Amato said. ““The dog would have went into shock and died if she didn’t do that.”

The dog has since been named Tara, after the trooper that saved her.

Police haven’t determined whether the dog was thrown or fell, although they believe if she had just fallen the owners would have stopped and tried to help. “Anything is possible at this point,” Amato said. “But the fact of the matter is, it’s very strange that no one’s come forward claiming ownership or anything.”

There is a $1,000 reward for information leading to an arrest and conviction in the case. Amato said anyone with information should call him at 732-312-7153.

UPDATE – Police are now saying the dog who was thrown from the car on Saturday had been stolen from her owners earlier that day. Her name is “Lima” and her owners visited her Sunday the Red Bank Veterinary Hospital where she is currently recovering.

The dog who was allegedly thrown from a vehicle along the Garden State Parkway on Saturday was released this afternoon from Red Bank Veterinary Hospital.

Buddy Amato, chief law enforcement officer for the Monmouth County SPCA said the dog’s owners were located but they are not suspects in the case, and the dog was taken from them without their consent prior to the event that occurred on the Garden State Parkway.

The owners sincerely thank everyone for their support but do not wish to come forward at this time. They have asked us to share these photos of Lema, which were taken right before she was discharged from the hospital.

From the family: “Thank you to everyone who has been so supportive and diligent in helping our girl.” 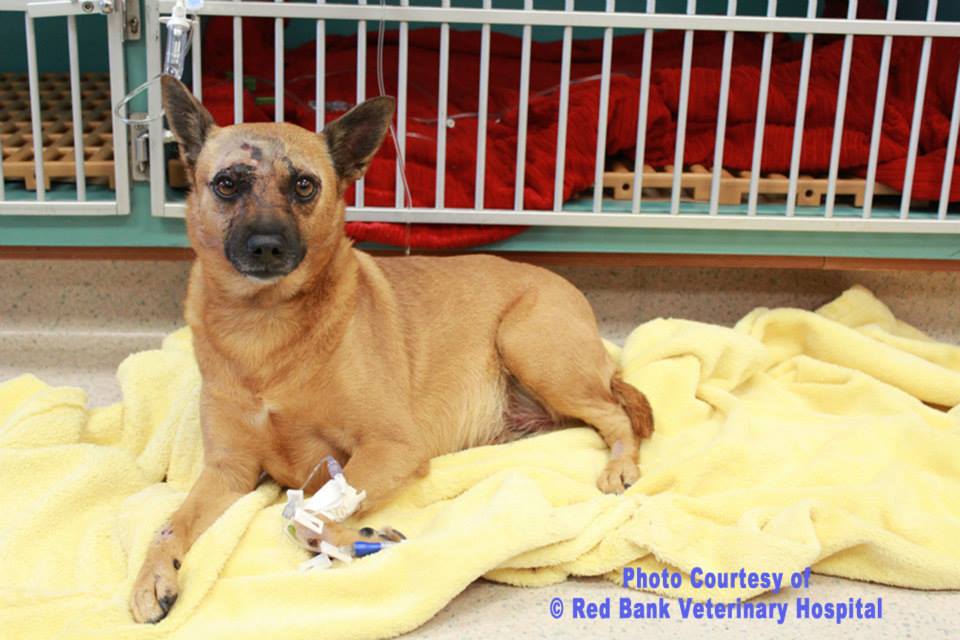 Lema was reunited with her family on Monday afternoon