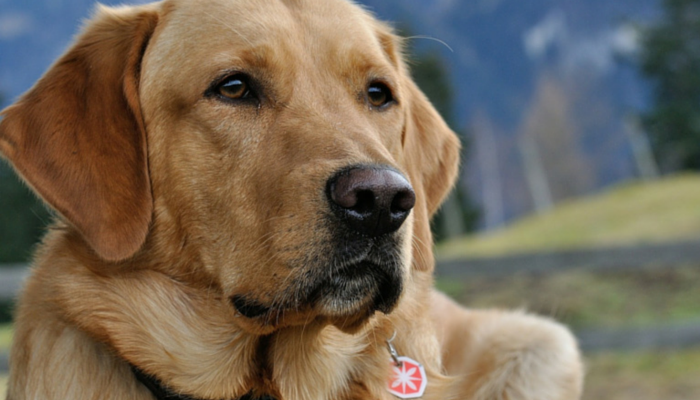 Dogs Are Being Trained to Help Detect Breast Cancer

Imagine being tested for breast cancer by simply breathing into a tube. That’s the aim of a new research trial taking place in the United Kingdom – they’re training dogs to detect breast cancer. Specially trained dogs are going to be sniffing breath filled tubes and the researchers will be analyzing their accuracy. A study found earlier this year that dogs can detect prostate cancer with 98% accuracy.

If the trial finds that the dogs can detect breast cancer simply by sniffing breath in a tube it could revolutionize the way doctors think about diagnosing all cancers.

Dr. Claire Guest is a behavioral psychologist whose own dog Daisy altered her to her own breast cancer while she was working on the prostate cancer trial. The dog would continually jump on Guest’s chest and after enough persistence she decided to have a doctor take a look. After medical testing an early stage tumor was found in her chest.

Daisy has since worked on over 6,000 urine samples and is 93% accurate at detecting prostate cancer.

Guest runs a charity, Medical Detection Dogs, that was able to raise the funds needed to start this new breast cancer detection trial. Daisy will be accompanied by six other dogs in the preliminary testing for the trial. They’re all being trained to sniff for breast cancer in breath samples.

The four dogs with the highest accuracy will be placed into the trial and used to test 1,500 examples from women.

It’s thought that the dogs which can detect scent in one part per trillion are able to pick up on volatile substances given off by cancerous cells.

Dr Guest said: “It is logical that the dogs can detect prostate, bladder and renal cancer in urine samples but detecting breast cancer in breath is something different.

I genuinely do not know what we are going to find. It is a question that needs answering. If it is found that dogs can detect it, it will change what we know about the diagnosis of all cancers. After all the blood flows around the tumor and then around the lungs. – Dr. Guest

“If proven it would have a significant impact on what we consider possible in the diagnosis of cancer.”

In the long term researchers are hoping the substances the dogs are picking up can be identified and electronic noses created to pick them up.

Dr Kat Arney, Cancer Research UK’s science information manager, said: “It’s nice to see that our four-legged friends are being recruited to help in the fight against cancer, as we know that some dogs can sniff out the molecules given off by tumors.”