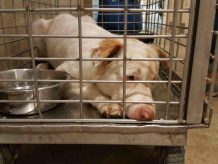 Poor Nate was found as a stray dog on Oct 17th wandering the streets all alone! Lucky for him he was rescued by Animal Control Officers and taken to the Austin Animal Center. He appeared to be in good condition but had a known heart murmur and was reported to be collapsing on walks. Nate was started on antibiotics for the pneumonia and an ultrasound was performed that diagnosed a heart condition called pulmonic stenosis. 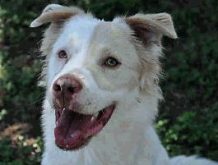 Pulmonic stenosis is a congenital defect of the heart that is a narrowing of the pulmonary artery, causing an obstruction of flow to the heart. APA has sent several dogs with this condition to Texas A&M for surgery as it is life threatening. The good thing about this defect is if surgery is possible it has a great success rate. If Nate is a candidate for surgery we will work hard to get him treated so he can move upward and onward. If Nate is not a surgical candidate he can still be adopted with this condition to a home that knows his limitations and prognosis. 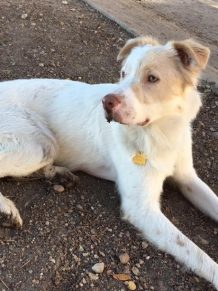 APA would like to give Nate the diagnosis he needs to have any chance of finding a home. Most adopters are put off by the unknown and especially when a high price tag is attached.

Off-setting that cost is important to finding Nate a furrever home. Can you help?