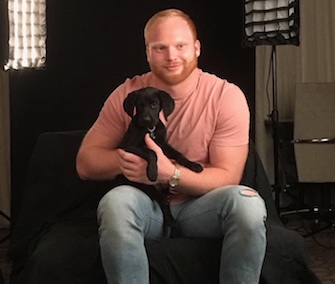 Pittsburgh Steelers rookie linebacker Tyler Matakevich wasn’t planning to adopt a dog when he arrived in Philadelphia last week for a photo shoot for the Show Your Soft Side anti animal cruelty campaign. But when a little black Lab mix named Jerrica was placed in his arms and instantly went to sleep, Matakevich’s heart melted. “It felt like they set me up,” Matakevich said. “I knew right away.” Days later, the NFL player’s girlfriend drove to Delaware to pick up the pup, who they’ve renamed Bailey. She’s settling right in at her new home in Connecticut, where she enjoys pestering the family’s 13-year-old dog. — Read it at The Dodo

Say what’s up to the new Puppy!! pic.twitter.com/16HrwmZLLK