Laika bit me the first day I had her. It didn’t draw blood but it was still quite painful and alarming.

Not much about Laika’s history is known. She was found sleeping in someone’s flower pot in the middle of the night. She was taken to an animal shelter a few days later after the good Samaritans had no luck finding her owner.

After four business days at the shelter she was taken off of the stray hold and put up for adoption. I’ve always assumed that since she was found on a low traffic rural dirt road with no collar she was probably abandoned. That’s just my personal speculation; I’ll never know.

I wasn’t looking for a puppy and yet I ended up with Laika; a 4 month old German Shepherd mix. Not what I had planned but things just turn out unexpectedly sometimes. We hit it off instantly, well I thought we did. Puppies do tend to play with, kiss, and love everyone though.

As I was leaving the shelter with my new puppy the staff handed me a towel and rawhide to take along, they had been given to her when she arrived at the shelter.

They said she might be more comfortable having a familiar item around and I agreed. I set her up in the backseat of my car with her loot and we made the trip back home.

When we got home I opened up the backseat to take my new lovely puppy out to see her brand new forever home; but she had changed.

Something had happened to my sweet playful puppy I was cuddling 30 minutes prior. She had been replaced by a demon. A big nasty demon with a rawhide in it’s mouth. She was hunkered down and growling; her hackles were raised.

I tried coaxing her out of the car in my sweetest voice. I tried running around like a moron with my arms flailing about knowing that puppies like to chase. I got down on the ground and politely asked her to come over to me. Nothing. Still hunkered over with that stupid rawhide; whenever I would get within 2 feet the growling started again.

I backed away, gave it a few minutes and approached again. Same reaction; growling and hunkering down. I was at a complete loss. How did I expect to raise this puppy if I couldn’t even get her out of my car?

I tried the other side of my car, approaching from behind. As soon as I grabbed her leash she lunged out and bit me. I was in shock but grabbed that stupid rawhide she had foolishly dropped in order to bite my hand. I had the leash and held onto it for dear life. I was going to do whatever it took to win this battle and at least get this puppy inside.

Surprisingly enough as soon as I had that stupid rawhide in my hand she shed her demon skin. She was a cute and playful puppy again. She suddenly wanted to be my best friend; whether it was just to get that rawhide back again we may never know, it made it’s way into the trash immediately. 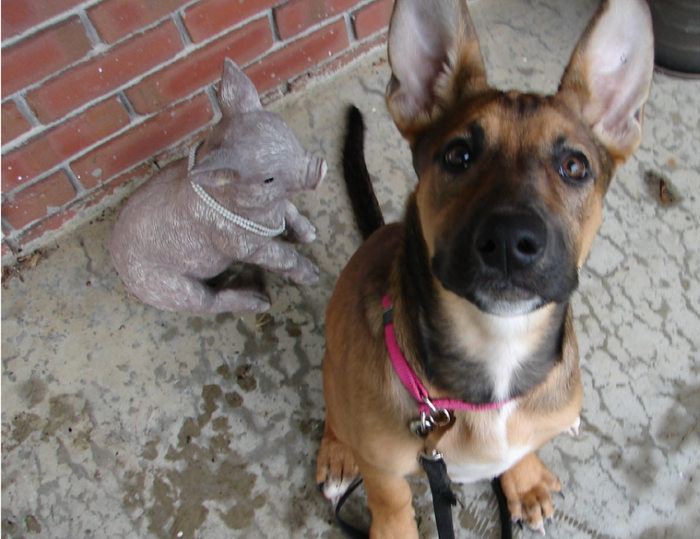 This is the demon aka Laika on her first day home shortly after she bit me.

And So The Quest Began

I could have called the shelter and asked for another dog, perhaps one that wasn’t defective. But I didn’t.

After my new puppy Laika went to bed I started researching resource guarding. Although I’ve lived with many dogs I’d never experienced it and had no idea where to begin.

There’s a lot of great information out there on how to stop it from happening but just reading the first chapter of Mine A Practical Guide to Resource Guarding by Jean Donaldson made me realize I was going to be able to deal with it; my dog wasn’t defective or mean.

By page 2 of the book I had already realized people put too high of an expectation on my dogs; Laika was normal. We want no aggressive behavior, ever, from our dogs towards any human throughout their entire life. This would be the equivalent of  asking a human to never lose their temper. I know I certainly haven’t met that expectation.

We also expect our dogs to be able to defend our own precious resources when it comes down to it. We’d like them to differentiate between the good guys and bad guys. Many dogs are bred specifically for their guarding abilities. (did I mention Laika is a Shephed mix?)

Donaldson doesn’t suggest in any way that resource guarding isn’t a serious issue to deal with. You just first have to acknowledge that it’s normal for a dog to protect his resources. They’ve been doing it for years. No one knows why certain dogs develop resource guarding and others don’t. It’s thought that it’s might be mix of nature vs. nurture.

Dogs will predictably act aggressive when they perceive a threat coming for their resources. It’s easier to start training when you have a good basic understanding of the biological legacy you’re training against.

Resource Guarding (aka Food Aggression) Is Fear Based

When a dog guards his food, bed, people, or toys he’s doing so out of fear. He is threatened by you – no matter how much you hate to hear it. It’s always perplexing when Laika exhibits guarding behaviors right after a nice belly rub or game of tug – things you would assume mean your dog trusts you.

I have stop my human brain from wondering why – if I go down that path I’d just end up with a lot of theories but no real solution. I’d be lying if I said it didn’t bother me, it certainly does. I don’t like knowing that my dog feels threatened by me. I’ve given her shelter, love, food, and entertainment for 3 years and she still guards occasionally. Instead of dwelling on it I force myself to get back into training mode. Thinking about it later has made me realize a lot of her guarding issues arise again once I get lazy with keeping up with the training.

All of the successes we’ve had with Laika’s resource guarding have been based on positive training. It’s effective when dealing with any fear based behavioral issues. Many times these anxieties and fears are signs of a dog that lacks confidence. If they’re met head on with any aggressive or negative training you’re going to be reinforcing more fear. The ultimate goal is to have a dog that doesn’t see you as a threat; a dog that trusts you.

We’ve Made A Lot Of Progress

It’s been a long process that we’ve managed with desensitization and classical conditioning. Those are fancy words I would have never learned if it wasn’t for Laika. Although it’s not always a walk in the park I really do appreciate the bond we’ve developed by working with each other so closely. When she does well I’m extremely proud, and she seems to love the positive reinforcement. I really do believe that she trusts me now.

If you have a dog that exhibits resource guarding against humans I cannot recommend Jean Donaldson’s book enough. It doesn’t contain specific information or examples on dealing with dog vs dog resource guarding. We’ve been working on counter conditioning and many food bowl exercises – I switched to hand feeding my dog for many months. It’s much better now, but it’s always a work in progress.

Do Your Research Before Adopting/Buying a Dog

Going to the shelter that day and deciding immediately to adopt Laika was a mistake. We’ve made it work but I didn’t take any steps to make sure she’d fit in well with my lifestyle. I had no idea what it be like to raise a Shepherd mix. I didn’t know how much time I would have to commit to this dog to keep her happy and well adjusted. I went to the shelter and walked out with the first puppy I fancied. No questions asked.

In hindsight I should have asked more questions at the shelter. I don’t know if she went through a safer test or food bowl test; I’d be amazed if she passed. It worked out fine for us but I don’t have any children at home. I also don’t have other dogs.

Resource guarding is a normal behavior it’s true; but it’s not something to be taken lightly. If you have a family I’d take out the extra risk of injury by adopting an animal that has gone through a behavioral assessment. If I had children at home I don’t know that I would have been able to take on a dog like Laika.

Dogs are a lifetime commitment; there’s good reason to take your time when choosing the appropriate companion.