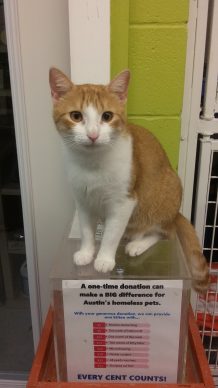 Tucked away among kennels filled with barking dogs longing for attention and busy staff and volunteers scurrying around to help the never ending flow of homeless animals, is an orange door. Open the door and then another and you’ll find yourself smack dab in the middle of a cat lover’s paradise. You’ve entered the FeLV Adoption Center where purrs are plentiful, tranquility fills the air and the whiskered residents are always glad to see you.

As soon as you walk in, feline greeters approach you without a sound and delicately wind around your legs. If you choose to sit down, you’ll more than likely be surrounded by kitties jockeying for position in the most coveted spot of all…your lap! Look around and you’ll begin to notice there are other cats quietly watching you from a safe distance.

They often crave your touch as much as the more social cats, but are a bit wary of newcomers. Pull out your finest cat-charming skills and you have a good chance of being rewarded with a gentle rub against your outstretched hand or a contented, appreciative purr. If this happens, congratulations! You’ve made a new friend and have helped convince a tentative cat that trusting humans can be a good thing. I was surprised to learn during a recent visit that the Felvies, as they are affectionately called, get few visitors. Who wouldn’t want to spend time in a room filled with sweet kitties who savor your company? Perhaps people are not aware of this cozy hideaway or maybe they don’t realize that, although the feline leukemia virus is contagious to cats, it cannot be transmitted to people, dogs or other animals. Also, because the virus is fragile, it doesn’t survive long once it’s no longer on a cat. Whatever the reason for the lack of human guests, anyone who hasn’t stopped by this relaxing, kitty nirvana is missing out! 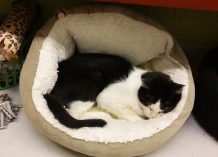 In addition to having a magical and therapeutic feel, this peaceful place has stories of adventure and intrigue. There was the cat who went missing– -it was thought that he must have slipped out when a door was left open just a little too long. After several days of worry, it was discovered that this clever kitty was there the whole time! He had figured out how to push the ceiling tiles aside and had climbed above them and found himself an out-of- sight perch where he could leisurely, and likely with some enjoyment, watch the panicked humans search for him. Then there was the kidnapped cat. She was abducted from the Adoption Center only to be surrendered to another shelter about a week later. She was promptly sent back to APA where she once again resided in the Adoption Center. She finally got her happy ending when an adopter fell in love and took her home for keeps.

The Felvies are definitely some of the sweetest cats around. Unfortunately, they tend to have a more difficult time getting adopted than most shelter cats due to their FeLV label. They are actually euthanized at some shelters, even when otherwise healthy, simply because they have the virus. But, Austin isn’t like other places and the Felvies always have a cozy sanctuary waiting for them at APA!. When they do find their way into someone’s heart and get the loving home they’ve been waiting for, it’s a day of celebration not just for these deserving cats, but also for the staff and volunteers who have cared for them.

Whether you’re interested in adopting a cat or you’re simply looking for a soothing, purr-filled escape from the stresses of the day, I highly recommend stopping by the FeLV Adoption Center. The undemanding residents will always make you feel welcome and the moments you share with them will boost your spirits, and theirs, long after you’ve exited through the bright orange door.

Find out more about the FeLV Adoption Center: