Transit Police Give Dog Back To Vet

U.S. Maine Corps Lance Corporal Dylan Bogue spent seven months in Afghanistan working side by side with his K9 partner Moxie. Moxie and Dylan worked in the bomb unit together helping to detect bombs and protect the platoon. The pair worked around the clock, they shared everything.

Bogue and Moxie were teamed up together in August of 2011 when he was sent to a dog handling course. The pair were deployed to Afghanistan together in January 2012. After serving four years Bogue retuned to civilian life, reluctantly having to say goodbye to Moxie.

His time spent serving has left Bogue with a number of scars. He suffered sever shoulder injuries and he suffers from Post Traumatic Stress Disorder (PTSD). Being apart from Moxie has been tough on Bogue, especially after he learned Moxie had been transferred back to the states.

He’s been hoping to be reunited with his former canine partner ever since the pair went their separate ways 2 years ago. Bogue contacted Lon Hodge, a Vietnam veteran who tours the country with his service dog Gander helping soliders with PTSD.

“He really wanted to be reunited with Moxie,” says Lon, who launched a social media campaign to locate Moxie. He posted on Gander’s Facebook page and on Twitter. The responses were overwhelming.

They found out that Moxie has been working as a bomb dog for a police department in Massachusetts for the past year. Lon contacted the police department and explained the situation. “They decided to give Moxie to Dylan because they are both heroes and wanted to honor them.”

“After serving their country so courageously, these two heroes deserve to be together again,” said the police department’s spokesman Joe Pesaturo. Bogue and his former service dog Moxie will be reunited today.

And thanks to social media and someone with ties to the Boston Red Sox Home Base program, an outreach service for veterans, found out that Moxie would be reunited with Dylan, they invited Dylan to throw the first pitch when the Red Sox play their next game.”

Playing baseball was a dream for Bogue in high school; he was scouted for scholarships in his senior year of high school and his team went on to win the state championship. He considered a career in baseball but joined the Marine Corps instead.

Wounded Warriors will be paying for Bogue’s expenses for the trip, and the Home Base program is providing tickets to Lon and Gander to accompany the pair to the game. 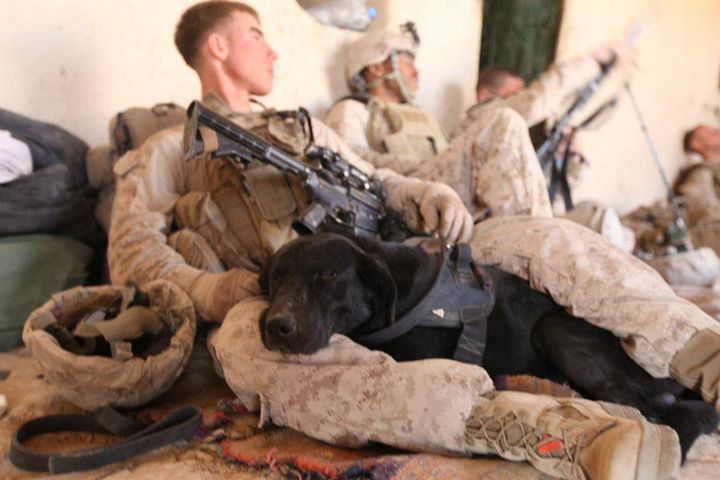